The Northbrook Civic Foundation is a non-profit volunteer organization of your neighbors and friends, who care about the betterment of the Northbrook (Ill.) community. Since 1950, the foundation has given back more than $3.2 million to the community in the form of  scholarships colleg 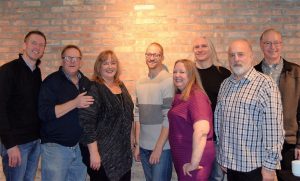 e scholarships for students and grants to worthwhile organizations that serve Northbrook. This is your opportunity to help raise funds that give back to the community, enhancing Northbrook as a great place to live and work.

Civic Foundation membership is open to the general public; the main requirements are that you be a resident of Northbrook and volunteer at Northbrook Days

Members of the Board of Directors are:

In the Fall of 1981, members of the Civic Foundation approached Northbrook village officials in the effort to regain control and use of the Civic Building. The building was restored into an attractive, functional facility, with offices, large community meeting rooms and a kitchen and rededicated in 1986. From this headquarters, the Northbrook Civic Foundation continues to provide active participation and funding to the community to this day.

Community portrait at Northbrook Days in 1925: